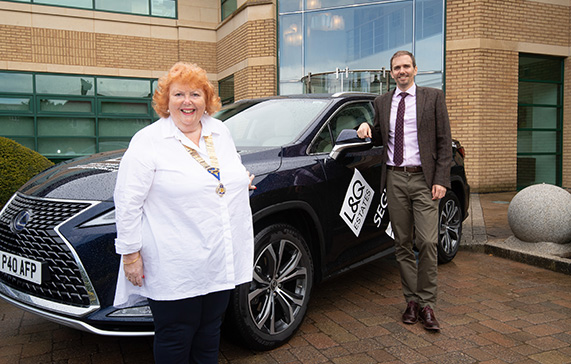 Largest strategic land developers in the UK, Warwick-based L&Q Estates, pledged their support to The national Association of Tangent Clubs and their President Tracey Pickin.

As the National Association of Tangent Clubs is celebrating its 50th anniversary and have chosen Warwickshire to host a charity ball to help tackle homelessness across the UK.

Tracey Pickin, National president of the Association of for 2021/22, has chosen Crisis as her nominated charity for the next 12 months.

The fundraising event will be staged at the Stratford Manor Hotel in Stratford-upon-Avon on 29 January 2022 and a host of sponsors have already pledged their support including one of the largest strategic land developers in the UK, Warwick-based L&Q Estates.

Its logo is among those appearing on two cars – a Mini Clubman and a Lexus RX – which Tracey will be driving the length and breadth of the UK, visiting Tangent Clubs and events connected with the friendship organisation for women.

Tracey, who lives in Warwick, said: “We are a very well-kept secret even though we are one of the largest women’s organisations in the country, since we have over 500 clubs and over 10,000 members.

“We provide the opportunity for women to enjoy social networking and friendships as well as support our communities and raise money for good causes.

“During the pandemic, we have had members who made scrubs, done shopping for those self-isolating and volunteered at vaccination clinics.

“As president, I am able to nominate a national charity that Tangent Clubs throughout the country will support as well as their local charities.

“We have organised a lunch for Crisis in July that has sold out and we’re now planning a ball in January, which wouldn’t be possible without sponsors like L&Q Estates because it gives us the opportunity to make the evening a little more special and hopefully raise even more money for Crisis.

“I chose this charity because I think homelessness must be terrifying and Crisis provide support not just once a year around Christmas but every day of the year.

“Women, families and young people who often through no fault of their own, maybe because a relationship has broken down or through health reasons, can find themselves homeless. Crisis has a fantastic Skylight Centre in Coventry which provides practical help for people to gain the skills they need to secure employment and permanent accommodation.

“This has been a difficult year or so for many people in different ways but we hope people will be generous and support Crisis as much as possible because I have seen the charity change lives and I would like us to help them to help even more people.

“The National Association of Tangent Clubs is 50 years old this year and we want to celebrate the past and shape our future to continue to be relevant to women’s lives.”

Adrian Clack, Group Land Director at L&Q Estates, said the business had no hesitation in supporting the National Association of Tangent Clubs and their worthwhile fundraising.

“L&Q Estates has supported a 30th anniversary ball for Acorns Children’s Hospice which raised over £15,000 so we have seen at first-hand the difference Tracey and a good fundraising team can make,” he said.

“Our company ethos is very much focused on creating and delivering new communities at the heart of our developments as well as delivering a future legacy for the benefit of new and existing residents.

“We wish Tracey the best of luck in her 12 months as national president and in her efforts to raise as much money as possible to help towards ending homelessness.”